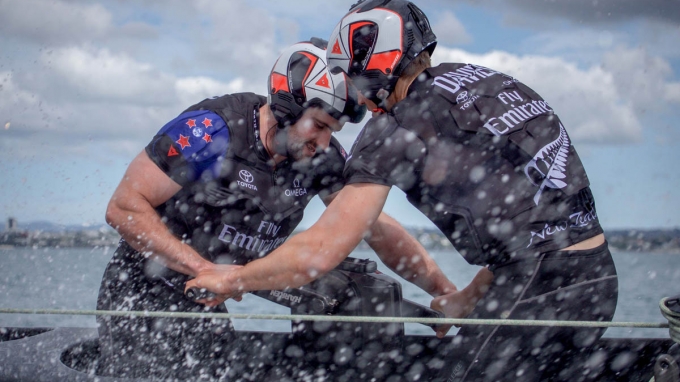 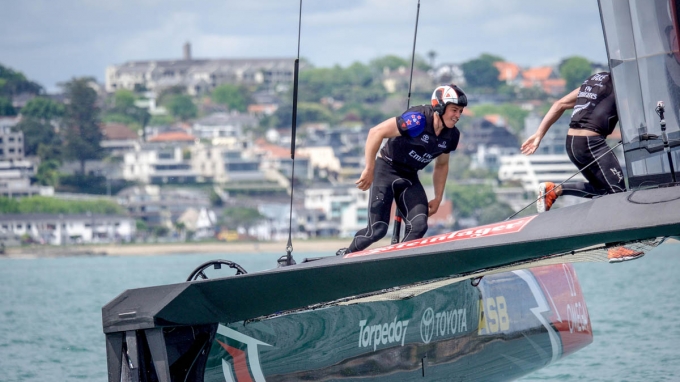 The Dainese Group gets onboard Emirates Team New Zealand for the 2017 America's Cup with the new SEA-GUARD, essential gear for crew’s protection while sailing.

The iconic Italian brand announced its partnership with Emirates Team New Zealand during a press conference at the EICMA - Motorcycling World Exhibition - confirming its commitment to finding innovative solutions for protection in dynamic sports.

Dainese has chosen Emirates Team New Zealand, which is at the forefront of international sailing, to explore a new field. This partnership complements other successful collaborations that the company has established in the past. In its 40-year history, Dainese has been alongside great champions like Valentino Rossi and has engaged ambitious projects such as making new suits - together with MIT and ESA (European Space Agency) - to help keep astronauts safer in space.

Special guest at the presentation was Max Sirena, former Luna Rossa Skipper and now Technical Advisor and member of Emirates Team New Zealand’s Management, explained to the audience the SEA-GUARD, the innovative life jacket that the Kiwi crew will be wearing during the races.

The SEA-GUARD is fully ergonomic and designed to combine both protective and floating functions; Dainese is currently collecting data to equip the SEA-GUARD with D-air®, the protection system that detects dangerous situations and automatically inflates special airbags around the athlete's body. First produced for World Championship riders, the D-air® system has since been developed - together with the FIS-Ski - for professional skiers and now it is officially used in the World Cup Series skiing races.

Max Sirena said: “The foiling AC50 catamarans that will be raced in the next America's Cup are flying machines, the most advanced yachts in terms of technology and performance. These boats will be able to reach speeds never seen before. Safety on board became therefore fundamental in our preparation. To count on a reliable and innovative partner such as Dainese it is a real plus for us. I’ve been passionate about motorbikes since I was a kid so for me it is a great pleasure today to welcome Dainese to the team.”

Cristiano Silei, CEO of Dainese Group stated: “We are very proud to support Emirates Team New Zealand in this very exciting project. Bringing our technology to the world of sailing is perfectly aligned with our mission of advocating and delivering safety in dynamic sports. We couldn’t think of a better partner than Emirates Team New Zealand who share our passion for performance and innovation. "

Grant Dalton, Emirates Team New Zealand CEO, who shares Sirena’s passion for motorcycles, concluded: “Motorbikes are my other passion, so I’ve known Dainese for a long time and I believe we share core values. Emirates Team New Zealand is internationally recognized as a leading innovator in sailing and our sailors are currently testing SEA-GUARD on the water. I am convinced that this collaboration will open a new chapter on safety at sea.”

Founded in 1972 by Lino Dainese, Dainese produces advanced protective wear for motorcycling, biking, winter sports and equestrian use. In 2007, the company acquired the internationally renowned AGV brand to produce racing and sports helmets. In 2015, the Group expanded with the acquisition of the POC brand that is the market leader in the production of winter sports and cycling protective gear. The protective gear made by Dainese, AGV and POC showcase some of the most innovative technologies applied to dynamic sports and used by the world’s top athletes.