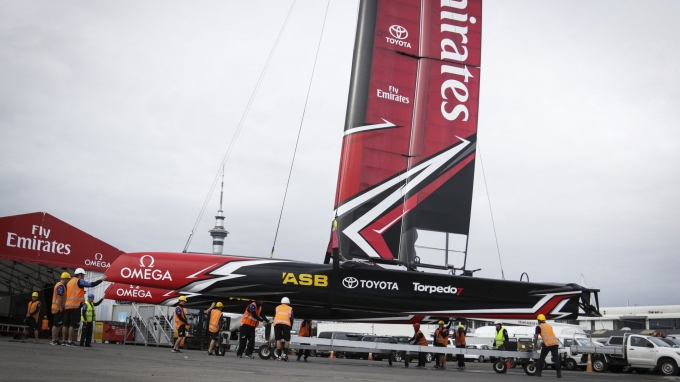 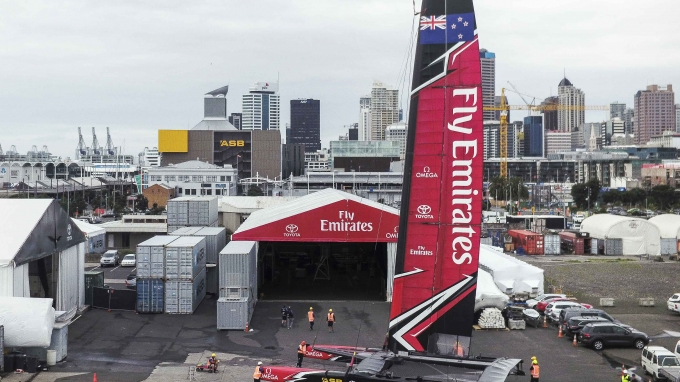 The 45 foot catamaran has been in the process of being built for the past six months and has taken a dedicated team of boat builders and sub contractors over 35,000 man hours to construct, with the main construction and assembly completed in house at the Emirates Team New Zealand base.

“This is certainly the most complicated boat we have ever built,” said Construction Manager Sean Regan.

“The amount of detail and systems that go into the construction of this boat is astonishing. This has been a huge effort by our guys in the shed to create such an amazing piece of machinery, and of course the designers who have been pushing the design throughout the construction process.”

Although there are many aspects of the eventual race boats that are one-design, such as the hull shape, the wing shape & the deck layout- it is the hidden systems and designs which is where the speed is produced and ultimately where America’s Cup is won.

The limits have been pushed in all aspects of the technology in design and construction of the boat, which will be used as the main test and development platform where key decisions will be made on how fast the actual America’s Cup race yacht will be when it is launched in early 2017.

“We have purposely pushed the boundaries hard with the design of this boat – we had to. We will be playing catch-up with the other teams, who have had the luxury of resource to have boats on the water for a long time now. But although we’re late to the party, a huge amount of R&D has gone into this project, and we’re confident that we’re launching a boat that is as advanced as that of any of our competitors. If we weren’t prepared to push the technology as far as possible, we could not be in a position to win.”

Perhaps the man most excited by todays launch is skipper and sailing team director Glenn Ashby who plays such an integral role in the decisions that go into the design direction of the boat.

He and his sailing team have been waiting patiently for the boat to kiss the water so they can spend endless freezing hours over the coming months testing and flying around Auckland’s Hauraki Gulf.

“This is hugely exciting, our guys have been putting in long hours at the gym preparing for this so we are chomping at the bit to get her out on the water in the next week or so.” said Ashby

“It’s a proud moment, the team have been quietly working away down here in Auckland away from where a lot of the action is focused in Bermuda, we expect the arrival of some inquisitive competitors with cameras and long lenses to begin showing up in the next few days subsequent to this launch. We think the focus will now shift from Bermuda to Auckland for a while.”

“ASB has a long history with Emirates Team New Zealand and we’re thrilled to once again support the ambitious crew as they continue to prepare for the America’s Cup. With a key focus on innovation, and ambition as one of ASB’s core values, we think the two organisations’ values align well,” Mr Beaumont says.

“Until this point the team has been working extremely hard under the radar from our container base tucked away in Wynyard Quarter, so for me and the team, the most exciting thing is that after all this time, since 2013, the people of New Zealand can now see the fruits of our labour flying around the waterfront.”

“You can’t miss the boat, and I am sure some of the speeds which we estimate it will be reaching will be nothing short of astonishing for people to see. This boat makes the AC72 from San Francisco look like a dinosaur.”

The boat was christened by Lady Margaret Tindall, wife of Sir Stephen Tindall and blessed by Ngati Whatua.